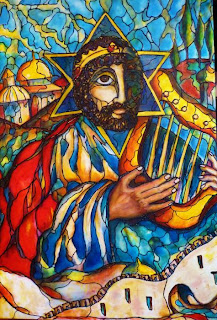 More than anything in my journey of Aliyah which began in March 2007, music has played a central and defining role in my daily life - so much so, that (as you know!) I co-founded an Internet Radio Station in Jerusalem in 2009.

Jerusalem songs - those songs which evoke such longing for the Holy City, sung by those of us who languish in the gap between Jerusalem Above and Jerusalem Belong - are part of my soul, my Jewish Neshama, and part of yours as well if you're a Jew, no matter where you are - Jerusalem, or anywhere else in the world.

Songs and compositions about Jerusalem have expressed the Jews' longing for their holy city for thousands of years. Although King David's Psalms did not mention Jerusalem often by its name, his imagery offers some of the earliest-known poetry that relates to the capitol of the Jewish nation and people.

Specific early references to Jerusalem occur in Divrei HaYamim -- Chronicles I -- which records David's purchase of Har HaBayit. Samuel 6:5 and Psalm 122 capture the majesty of the time when King David brought the Aaron -- the Ark of the Covenant -- to Jerusalem and housed it on Har HaMoriah in a tent.

David's son, King Solomon, built the first Temple in Jerusalem, referenced the city continuously in his Song of Songs. In Shir HaShirim -- Song of Songs -- he wrote "I adjure you, O daughters of Jerusalem, by the gazelles and by the hinds of the field, that you awaken not, nor arouse love, until it pleases."

Perhaps the most famous literary reference to ancient Jerusalem is recorded in Psalm 137 "by the rivers of Babylon" . When the Babylonian captors asked the Jews to 'Sing us one of the songs of Zion' the Jews responded "If I forget you, O Jerusalem, may my right hand forget her skill. May my tongue cling to the roof of my mouth, if I do not remember you, if I do not set Jerusalem above my chief joy." This quote continues to be a traditional part of all Jewish wedding ceremonies till today.

Poetry and imagery of Jerusalem continued to dominate the literature of the Jewish diaspora throughout the years of dispersion and exile. Yehuda HaLevi, in his 12th century poems, wrote of the Jewish nation's yearning to return to Jerusalem. "Beautiful land, delight of the world, city of Kings, my heart longs for you from the far-off west."

Early settlers in Ottoman and British Mandatory Palestine continued the tradition of including Jerusalem in their poetic literature. Hayim Nachman Bialik referenced Jerusalem repeatedly in his works. Naftali Imber published his poem Tikvateinu in 1877. "Our hope is not yet lost, the hope that is two-thousand years old, to be a free nation in our land, the Land of Zion, and Jerusalem." Tikvateinu became the basis for today's Israel national anthem, HaTikva.

An extensive American project, the Lowell Milken Archives, has now begun to collect many historical Jewish songs and compositions which reference Jerusalem as they trace the history and development of the region. While the majority of its work follows the progression of the American Jewish community through its music the Milken Archives also includes music of pre-State and post-State Israel, contributing, as it expands, a vast amount of knowledge and understanding of Israel and Jerusalem's history and maturity. Its founder, Jewish businessman Lowell Milken hopes to raise the spirit of American Jews through this music.

The materials that the Archive has collected examine the lives of early Jewish pioneers who settled throughout the Land of Israel. The Archive's Israel Suite includes specific compositions about Jerusalem that examine the poetry and music that has accompanied the development of the modern, multi-ethnic city.

The Milken Archive contains recordings several early composers. Two works by Julius Chajes, Adarim and Old Jerusalem are featured. These compositions reflect perceptions of early 19th century aliyah until statehood and afterward. They reflect the exotic ambiance of Jerusalem through words and musical elements. Meyer Kupferman's work The Shadows of Jerusalem doesn't mention Jerusalem by name but, in a memorial to the memory of his family that was murdered by the Germans during the Holocaust, he references the symbolism of Jerusalem as the hope for redemption and the symbol of Jewish unity.

The Six Day War inspired some of the most profound and moving pieces about Jerusalem. Naomi Shemer's 1967 Jerusalem of Gold is still recognized today as the premier composition of modern times about the joy and exhilaration that the Jewish people felt at having been reunited with their sacred sites. The Milken Archives presents an additional recording. Canticles for Jerusalem by Vivian Fine is a liturgical composition which was created for mezzo-soprano and piano using Yehuda HaLevi's "Libbi B'Mizrach" as the music's inspiration.
Posted by Lorelai Kude at 11:01 PM 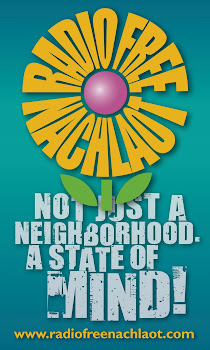 Not Just a Neighborhood: A State of Mind!